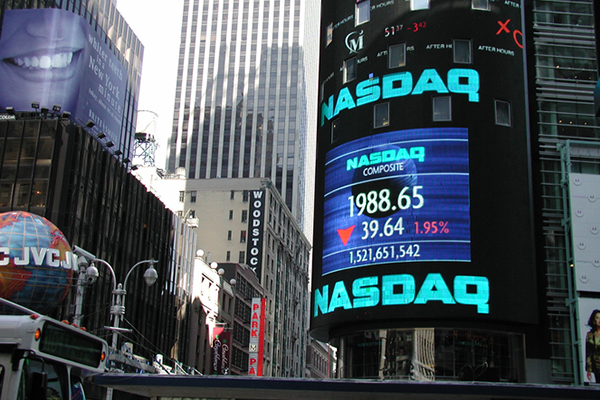 US equities closed mixed on Monday, and this was probably the largest discrepancy between two benchmark indexes in many months, with Nasdaq flashing red at the end of the session. Still, it was generally a bullish day since the Dow and the S&P 500 updated their record highs following the positive news about a COVID vaccine.
Dow Jones surged 2.95%, the S&P 500 added 1.17%, while the tech-oriented Nasdaq dropped 1.53%.
Investors focused on value stocks, with companies being damaged the most by the lockdown measures demonstrating incredible rallies, leaving tech stocks in shadow. Boeing rose over 12%, and airlines and cruise line companies rose about 20% and 30%.
The bullish craze has to do with the announcement from Pfizer and BioNTech, which said their vaccine had an efficiency rate of over 90% in preventing COVID, according to the results of a late-stage trial. Also, the companies stressed that they hadn’t found any noticeable safety issue so far.
The S&P 500’s energy index also surged and had the best session since April, as oil prices rose about 10%.
US banking giants also thrived, with Citigroup and Bank of America adding about 9% each.
On the other side, shares of tech firms and other companies benefiting from the “stay-at-home” rhetoric declined or saw small gains. Netflix and Amazon closed in the negative territory, losing over 8% and 5%, respectively. Video communication app provider Zoom tumbled about 20%.
Pfizer itself closed about 8% higher, after soaring over 15% during the session. Still, the healthcare sector declined mainly due to Biogen’s slump of about 30% after the US Food and Drug Administration didn’t green-light its Alzheimer treatment.
Elsewhere, McDonald's added about 1.0% after its Q3 revenue and profit beat estimates.
Besides the vaccine hopes, markets were supported by Joe Biden’s confirmed victory, even though the Congress will be divided.
Stock trading volumes on retail platforms saw record levels on Monday, to the point where many brokers, including TD Ameritrade, Fidelity, and Vanguard, faced technical difficulties.
In Asia, stocks are mostly up following the Wall Street rally driven by Pfizer’s vaccine announcement. The development of an efficient COVID vaccine is expected to accelerate global economic recovery.
At the time of writing, China’s Shanghai Composite is down 0.61%, while the Shenzhen Component has declined by 0.29%. Unlike Pfizer, Sinovac Biotech’s final stage trials in Brazil for its COVID vaccine candidate have been halted after a severe adverse reaction. Also, China’s inflation and producer price index for October fell short of expectations. The consumer price index rose 0.5% y/y against the forecast 0.8%, while declining 0.3% m/m, versus the expected 0.2% growth. The PPI contracted 2.1% y/y against the forecast contraction of 2.0%.
Hong Kong’s Hang Seng Index is up 0.49%.
Japan’s Nikkei 225 is up 0.28% minutes before the close. Japanese Prime Minister Yoshihide Suga is deploying fresh stimulus to support the economy.
South Korea’s KOSPI is up 0.14%. In Australia, the ASX 200 closed 0.66% higher.
European futures are mixed as investors are taking profits after one of the best trading days in months.
In the commodity market, oil prices are correcting after closing about 9% higher on Monday following the vaccine news. Both WTI and Brent brands have lost over 1% so far, as investors took profits and focus on weakening demand in Europe and the US, where new lockdown measures have been reimposed. WTI is now trading at around $40, and Brent is hovering below $42.
Gold is trying to recover previous losses after declining by about 5% yesterday. At the moment, the metal is up 1.35% to $1,879. On Monday, gold peaked at over $1,960.
In FX, currencies that acted as safe-haven during the COVID crisis, including the US dollar and Japanese yen, have declined. The USD Index is now down 0.02% to 92.683. EUR/USD is up 0.17% to 1.1833.
The British pound moves almost in tandem with the euro, while the Australian dollar fell 0.04% against a weakening greenback following the downbeat inflation data from China – Australia’s largest trade partner.